Ok, I officially suck! I didn't do a post on my favorite holiday! *hangs head in shame* lol. I've just been really out of it lately. I got a sinus infection and pink eye (it was lovely as I'm sure you can imagine) this last we 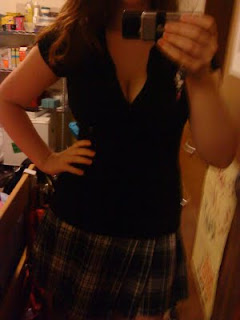 ek, and so just life has pretty much sucked. Which honestly is par of the course this semester which has been: IL flu, bronchitis, death of a loved one, grieving, depression, sinus infection, pink eye. Aka, God hates me. LOL

Ok, anywho so, I was DETERMINED to have a fabulous Halloween weekend. Like I said, its my favorite holiday. You might not have heard (or you might have) but I kinda love costumes and dressing up. If I could do it every day I would. Sadly, society seems to frown upon that. So I wait for themed parties and Halloween, and just bask in the gloriousness.

My camera currently hates me and decided that doesn't want to upload pictures so I'm having to use not so great ones from my camera phone. 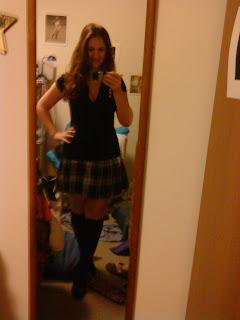 This is the third year in a row now that one of the nights of Halloween I have gone as a naughty school girl. This year it was a bit different, as I had to use a black polo instead of white (since my mother stole the white one claiming it was stained) and I actually had matching black knee socks!!! WOOT WOO!!! (yes that is actually a big deal for me, lol). Also, this year, the skirt that has always been very very tight, was just a bit too tight, and I had to move the button. But since I did that, I was able to also roll the skirt so it could be a bit shorter :) I think it was a good life choice. :)

Night two (Halloween itself). 1940's Pin up.
I've done pin-up before (and I would show you pictures, but i'm 17 in them and i'm not sure about the legality of that, so for all our safety, I will refrain), but again, this year, I did it a bit differently. All of my friends were bitches last night and no one helped me do my pin curls, so I did them on my own- which for all the men out there that don't know- is really difficult. I was going 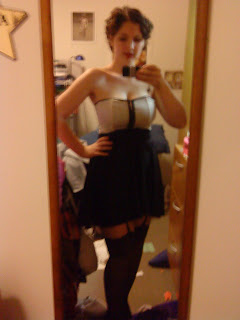 to take them down and wear actual pincurls, but instead since it was kinda raining and gross here, and I wasn't sure they woudl work, I left my hair up in the pins bc I thought that way it would atleast be obvious that I was from some other decade, you know? 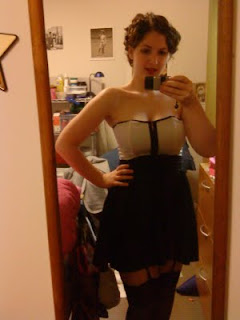 cy garter belt, and thigh highs and a comfortable pair of wedges and 1940s makeup and ta-da!!! I was totally born in the wrong decade. If I had been bore in the late 20s I could have been a 40s pinup and then a 1950s house wife! lol. :)

So, what did all ya'll go as? Did you get to pass out candy to little kids? I miss doing that. Well actually I miss being a little kid and going trick or treating, but passing out candy is pretty awesome too. :)

Kelley
I'm a 24 year old recent-ish college graduate who has been interested in spanking my entire life, and is finally experiencing it. My personal life is currently quite complicated, but have had a few Daddies/boyfriends in the past who loved me and disciplined me and who I love more than the world . I am a fun, outgoing, intelligent nerd, and I can be a spoiled brat at times...ok most of the time. :)

Everything on this site, unless otherwise noted is my property and copyrighted. Do not use any photos, videos, or text without my permission please, and always credit and link back to me. I work very hard on this blog, and its totally free, so please respect me when I ask y'all to not take things that aren't yours. More than anything it is a privacy thing.

Blogs/Sites of Friends and the Industry